A few months ago, the independent Spanish online newspaper El Diario published a cartoon entitled “Ebola in Madrid”. It showed a health worker, camouflaged in a green protection suit, wearing a white head shield and goggles, leaning over a patient almost completely hidden under the sheets of the hospital bed. The huge hospital room is deserted and empty, virtually looted. It resembles an evacuated department store, but depicts a worn down, abandoned hospital floor. The health worker addresses the patient, saying: “Now the most important thing is that you get calm and relax. We should not disregard the possibility that the virus dies from boredom”. 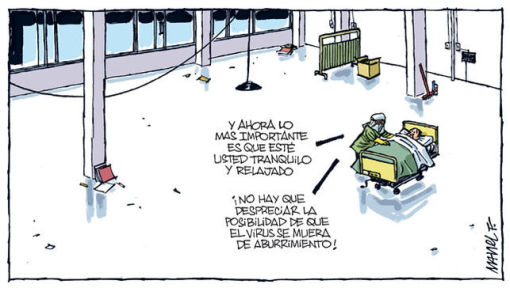 The cartoon was published in the first week of August 2014, when a Spanish missionary, sick with Ebola, was repatriated from Liberia to his home country. It sarcastically staged two things: the helplessness of health professionals against a deadly disease in the absence of an effective treatment; and a decaying Spanish health care system, which is pictured as literally falling apart, ill prepared to care for those suffering from a highly contagious and deadly disease.